— Not Only Removal, But Also Recycle

Crystalactor® is an induced crystallization process, mainly aimed at removal of specific pollutant presented in wastewater as ionized species. Through chemical dosing, which reacts with target component (ion) in water, the sparingly dissolved compound is formed and precipitated out of water, that is removed in as solid.

In contrast with conventional chemical sedimentation process, through control process condition and the configuration of the system (super-saturation, seeding material, fluidized bed condition etc.), the precipitated compound is induced to crystallize around seeding materials which are placed in reactor of Crystalactor® process, as a result the high-purity, low water content spherical crystal beads are formed (so-called “pellet”). The pellets are conveniently separated from water and removed. In conventional sedimentation process, the target component only forms amorphous solid particles, that has to be removed in form of sludge via liquid-solid separation process such as sedimentation.


In most occasions, the removed inorganic “pollutant” mentioned above, is actually desirable resource (e.g. Phosphate, Fluoride, noble metals etc.). With Crystalactor® technology, these are removed in high-purity, low water content (5% - 10%) pellets, which enables a direct recycle and reuse. But in conventional chemical sedimentation process, the resulted sludge from treatment contains various impurities, and water content even after dewatering, is still as high as 60% - 80%. This not only leads to a large volume that is difficult to handle, but also makes it almost impossible to be reused. 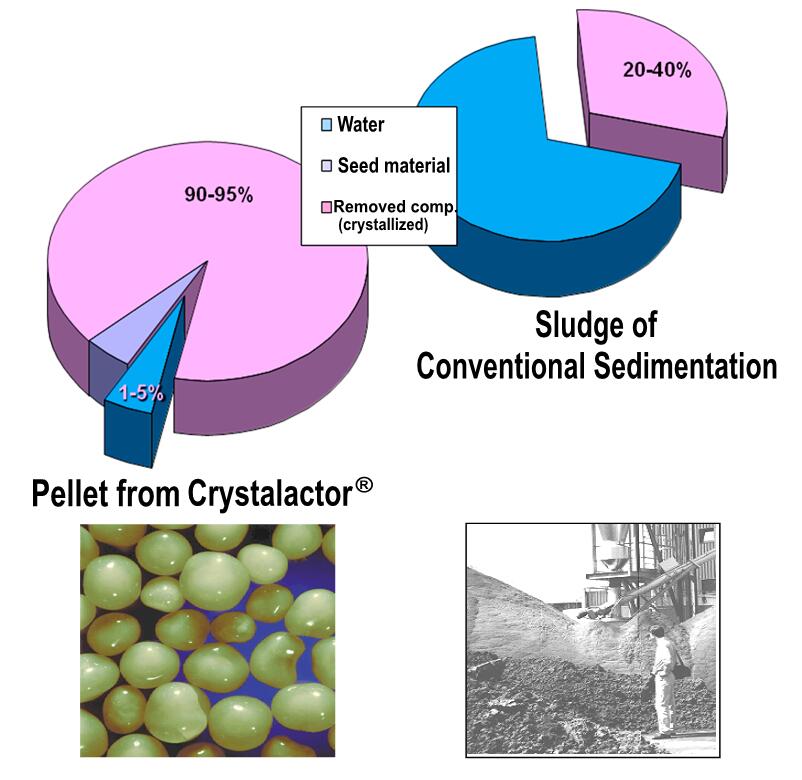 In various industries, the sludge raised from conventional chemical sedimentation is often hazardous waste, which has to be disposed with special means of high unit cost. What makes it worse is that the 60% - 80% water content of the sludge results in big volume (though mostly water in it) and this further increases disposal cost. Whereas with Crystalactor® process, the target pollutant is recycled and can be reused as resource in form of pellet. Moreover, as no sludge is produced, the large hazardous waste disposal cost can be saved. This is the practice totally in line with the concept of sustainable development and cycling economy.